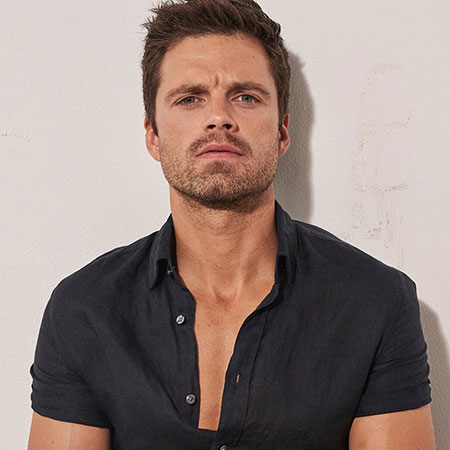 Sebastian Stan is a Romanian-American actor who is mainly known for playing the role of Bucky Barnes in Captain America: The First Avenger. Similarly, he is also recognized for winning Critics’ Choice Television Award as best supporting actor in the miniseries, Political Animals.

Actor, Sebastian has dated several celebrities but most of his relationship did not go well. Margarita Levieva is also one who has been in a relationship with him.

Sebastian Stan was born on 13th August 1982, in Constanta, Romani to Georgeta Orlovschi, mother. His mother got divorced from his father when he was just 2 years old. Afterward, he and his mother moved to Austria where Georgeta employed as a pianist. After working for almost four years as a pianist, she took Stan to New York.

Sebastian Stan is a graduate of Rockland Country Day School. During that time, he starred in several productions including Over Here!, Harvey, Little Shop of Horrors, etc. Besides, he was also cast in camp productions when he was attending the Stagedoor Manor, arts summer camp.

Right after that, he realized that acting is only the source to take him to the top. Following it, he joined Rutgers University’s Mason Gross School of the Arts, which gave him the opportunity to study acting at Shakespeare’s Globe Theatre in London.

Stan has been appearing in plays and film since 2003. He appeared in 11 episodes of Gossip Girl beginning in 2007. From the beginning, his role was liked by many people but  2010 was when his career really began to take off.

That year, Stan appeared in Darren Aronofsky’s ballet thriller, Black Swan and also began filming the supernatural horror film, The Apparition. Till date, the talented actor has appeared in the numerous numbers of television series and films. Some of them are.

Sebastian Stan was in a relationship with, Leighton Meester for about three years. She is an American actress who co-starred in the series, Gossip Girl.

Stan was also in the relationship with an American actress, Dianna Agron for a year.

After Dianna, he dated Once Upon a Time castmate, Jennifer Morrison. However, their relationship was also meant for a certain time. The couple separated after dating for almost a year.

Among all these actresses, Margarita Levieva is also one who has been in the relationship with Stan. She is a Russian actress known for her role in the films Adventureland and Spread. The boyfriend and girlfriend dated each other for approximately 2 years and separated.

Currently, Sebastian is living a single life. Besides, he is working on his upcoming movies comprising, The Last Full Measure, Destroyer, Avengers films.

The handsome and talented, Stan earns a handsome amount of money from his multiple professions. But makes huge money from his acting professions. Allocating information from several sources as of 2019, it is found out that Sebastian stan current net worth is estimated to be around $4 million.

Analyzing his on-screen works, he appears to be making huge money in the coming days. Moreover, Stan also owns numbers of luxurious cars including Jaguar Piecha. He also owns a vintage car.

Apart from his acting professions, Stan is also popular on social networking sites like Instagram. He has millions of followers on it.