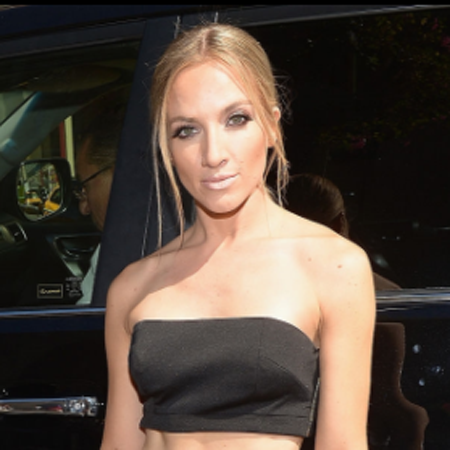 Shannon Bex is a professional dancer, singer and a former member of the musical group Danity Kane. She is well known as a cheerleader for the Portland Trail Blazers. Moreover, she is famous for her song I’m Out which was released in 2012.

Shannon Bex has won the hearts of millions as a stand out performer in the platinum-selling group, Danity Kane. With her music and successful musical group, she makes her attractive salary and net worth, which adds up her current net worth of $ 1 million.

Shannon Bex also makes her income from endorsement deals with CoverGirl cosmetics. As she is still active in this industry since 2002, thus no doubt her net worth will go higher in coming days.

Shannon is a happily married woman. Shannon Bex got married to Ron Basada in 2003. Her husband is a choreographer and hip-hop dancer.

The couple shares a healthy relationship of more than fifteen years. Moreover, on August 2013, the couple celebrated their 10th Anniversary.

10 years ago I married my best friend. So grateful God chose you for me! xo bex pic.twitter.com/7diejODfvP

Shannon Rae Bex was born on 22nd March 1980 in Bend, Oregon, USA. She is the daughter of Pamela May Bex and Marshall A. Bex. Growing up in Bend Oregon, Shannon Bex had an interested in dancing since her childhood. She started to dance at the age of six and began training in ballet. Her older brother, Marshall Lee Bex runs his own video production company.

Perfect photo for #fbf I have the best big bro a girl could ask for. So many great Christmas memories with my family! #blessed #grateful #family #christmas xobex

Talking about her education, Shannon Bex studied at Mountain View High School, where she participated in dance, drama, and choir.

Later on, Shannon Bex appeared in the series Fame in 2003, where she completed the show as a runner-up. Moreover, Shannon Bex also walked for Dizon Playboy Fashion Show.

At the age of 22, Shannon Bex became a part of Making the Band 3. She then became the oldest member of Danity Kane in 2005. Moreover, she was the only married member of the group during its inception.

However, Danity Kane group was dismissed in 2009 because its members went back to Making the Band series by MTV. Later, Shannon Bex announced a new band called Bex in 2011 and performed with her own group, Bex. But the band never released an album.

Shannon currently works as a recorder/writer for Dumblonde. It is a dance/pop duo which was created by Bex and another former member Aubrey O’Day. To know more about her, you can follow her on social networking sites.