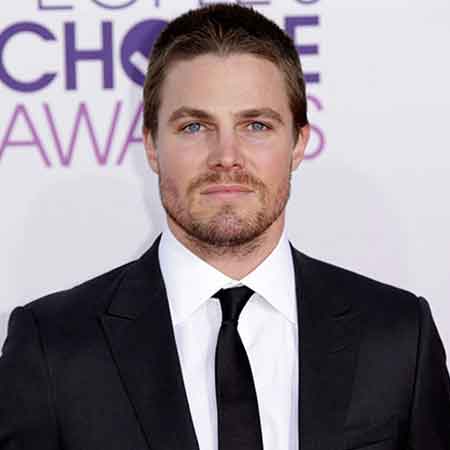 The Gemini Award winner, Stephen Amell is a Canadian actor known for his role as Oliver Queen / Green Arrow on The CW superhero series, Arrow. Moreover, he is also a wrestler and has worked in WWE in 2015 and Ring of Honor in 2017.

Stephen Amell was born on 8th May 1981, in Toronto, Canada as Stephen Adam Amell. He is the son of Sandra Anne (Bolté) and Thomas J. Amell. His uncle Robbie Amell is also an actor. He belongs to a Canadian nationality.

Amell attended the St. Andrew’s College. Since his childhood, Amell was the greatest fan of wrestling.

In 2019, Amell will be starring in the movie Code 8 as Garrett. Likewise, his television series appearances include,

The 37 years old versatile actor, Stephen Amell was previously married to an actress, Carolyn Lawrence. They tied the knot on December 8, 2007, in Toronto. But they failed to continue their relationship and finally divorced in 2010.

After that, Amell tied the knot with his second wife, Cassandra Jean, an American actress and model on December 25, 2012. Their first wedding was held at the Caribbean in a private ceremony. Furthermore, the couple married for the second time on May 26, 2013, in New Orleans.

Amell and Jean welcomed their daughter Mavi Alexandra Jean Amell in 2013. Since their wedding, the couple is still together and is living happily. Till date, they haven’t faced any rumors of divorce and other affairs.

As being such a renowned actor, Stephen Amell is living a lavish life with his wife and daughter. Since long, he is still active in the field of acting. From his acting career, Amell earns an astonishing amount of money.

The house features a kitchen, a family room, a pub, a library, five bedrooms and four bathrooms situated in 3,920 square feet area.  Similarly, Amell further owns several cars including Porsche Cayenne worth $59,600, Citroen C4 Crossover worth $34926 and Dodge Charger worth $28,495-$67,995.