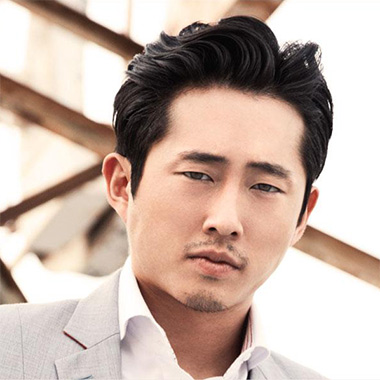 Steven Yeun is a well-known Korean-born American actor, famous for playing in the AMC series ‘The Walking Dead’ as Glenn Rhee, for which earned a role in many independent films. He is also seen in few short films and has done voice job for the Crysis video game series. He is also known for appearing as Wan in ‘The Legend of Korra’.

Steven Yeun attended Kalamazoo College. He graduated from there in 2005 holding bachelor’s degree in psychology and a concentration in neuroscience. It was during his time at Kalamazoo, Yeun met Jordan Klepper through Klepper’s sister, whom he would later follow to joined Second City in Chicago.

“I like documentaries because there’s nothing to nitpick or criticize about scenes if they aren’t just right. It’s about honesty and real-life circumstances coming out. Granted it can be swayed by how people tell that story, but overall, I like it because it is true.” -Steven Yeun.

During his freshman year at Kalamazoo, he started developing an interest in acting .He got more interested when he watched the college’s improv group. He later enrolled for the group but got rejected at first while he auditioned for Monkapult. He planned to pursue an improv career in Chicago but his parents wanted him to enroll in law or medical school. Yeun later told his dream of becoming an actor to his parents but was not happy with his decision at first. According to him, his parents gave him two years to pursue his career in acting. In 2005, he moved to Chicago and lived in the city’s Lincoln Square with his brother.

After completion of his graduation, Steven Yeun joined Stir Friday Night, a sketch comedy group which is composed of Asian-American members. In October 2009, he joined The Second City in Chicago before moving to Los Angeles. In 2010, Yeun earned a role in the popular thriller drama series  The Walking Dead, in which he had a recurring role as Glenn Rhee. In 2014, he portrayed Kenny in ‘I Origins’ and ‘Like a French Film’ as Steve in 2015. He lent his voice to Tony Chu in the 2016  American animated crime film ‘Chew’, directed by  Jeff Krelitz

Steven Yeun will be appearing in an upcoming South Korean-American action-adventure movie ‘Okja’. The movie will be directed by Bong Joon Ho and co-written by Bong and Jon Ronson.

Steven Yeun has invested in The Bun Shop, is a Korean-Mediterranean fusion restaurant located in Koreatown, Los Angeles. The shop is owned by his younger brother Brian Yeun and his business partner James Seok. Standing normally tall with a height of 5 feet 9 inches, he is  not fully fluent in the Korean language.

According to his public profile, Yeun is not yet married and possibly single, as there are no records of him having a girlfriend or romantic affairs. As of 2016, his net worth is estimated to be $4 million dollars and receives a handsome amount of salary from his acting and other sources.

In 2011, Yeun was nominated for Saturn Award for the Best Supporting Actor on Television in The Walking Dead. In 2016, he appeared in the music video of Park Jin-young ‘Fire’ featuring Conan O’Brien & Jimin Park.