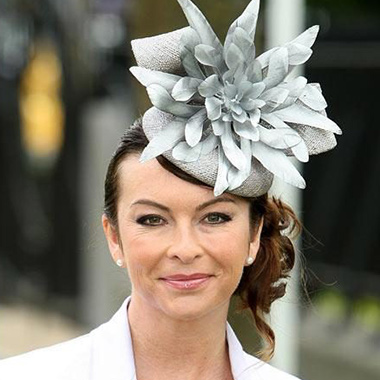 Suzi Perry is a famous English Tv presenter, columnist, sporting host, and former model. She is best known for covering MotoGP for BBC as well as hosting ‘The Gadget Show’ on Channel 5 and covering BBC’s ‘Formula One’.

Suzi Perry got married to Steve Bullock in 1997. Their marriage life was short-lived and in 2002 they ended their relation by divorce. While filming for ‘The Gadget Show‘ she became romantically involved with Bastien Boosten. In February 2009, Perry was engaged to her Dutch boyfriend, Bastien Boosten during that time she was two and a half month pregnant.

Suzi Perry was born on 3rd May 1970 in Cosford, Shropshire, England, UK. Her father was a music promoter and her godfather Mel Galley is a guitarist. Perry spent most of her childhood in Finch field, where she was educated at  Smestow School in Wolverhampton and had a school job at Wolverhampton Grand Theatre, as a lighting technician.

Suzi Perry went on to pursue her educations and studied business studies and finance at  Wolverhampton Polytechnic (now- the University of Wolverhampton).

Shortly after graduation, Suzi Perry received a modeling contract and spent 12 months working as a model in Japan. She then later returns to her homeland Britain as an advertising model. Since then, she is seen presenting and reporting sports-related programs that include Wimbledon, the Boat Race, the London Marathon and the Great North Run. She also presented the 2004 Summer Olympics in Athens.

Suzi Perry started her reporting career from the 1997 season of MotoGP for the BBC Sports, where she served the network for 13 years. During her time at BBC, she has covered numerous events including ‘The 2010 Epsom Derby and Royal Ascot. On 21st December 2012, BBC announced that Suzi Perry would replace Jake Humphrey as presenter of the BBC’s Formula One coverage from the 2013 season and was later assigned to write regular blogs for BBC Sports.

She is also considered as the first female who had taken on the full-time main anchor role in Formula One on British TV.

Perry also presented ‘Live Elite League Speedway’ on Sky Sports. Since 2004, she co-presented ‘The Gadget Show’ on Channel 5 and in addition, the creator of the show’s theme music in 2011. In February 2012, the show followed different format calling it ‘The Gadget Show: World Tour’, where Perry presented alongside Jon Bentley, Pollyanna Woodward, Ortis Deley and Jason Bradbury.

Suzi Perry was also the panelist of The Wright Stuff on Channel 5. On 14th June 2014, along with Huw Edwards, she co-presented the BBC’s coverage of Trooping the Colour.

Suzi Perry is an active patron of charity organization “Promise Dreams” raise money for children who are seriously or terminally ill and provide treatment, help, and support for them and to their families. In 2006, she appeared as one of the celebrities in the BBC’s Sports Relief event ‘Only Fools are Horses’. This philanthropist woman is also a great patron of Nationality Association for Bikers with a Disability.

In 1997, Suzi Perry got married to Steve Bullock. Their marriage life was short-lived and in 2002 they ended their relation by divorce. While filming for ‘The Gadget Show‘ she became romantically involved with Bastien Boosten. In February 2009, Perry was engaged to her Dutch boyfriend, Bastien Boosten during that time she was two and a half month pregnant.

On 17th February 2009, Perry suffered a ruptured ectopic pregnancy and was rushed to West Middlesex Hospital, where she underwent surgery.

Suzi Perry currently resides in Birmingham, England, UK but shared a house in the South of France with her fiance. Perry and Bastien married on 6th August 2009. She is a stepmother to a girl. Perry’s net worth is about $5 million dollars. She is active on several online social networking sites such as Twitter, Instagram, Facebook, and so on.