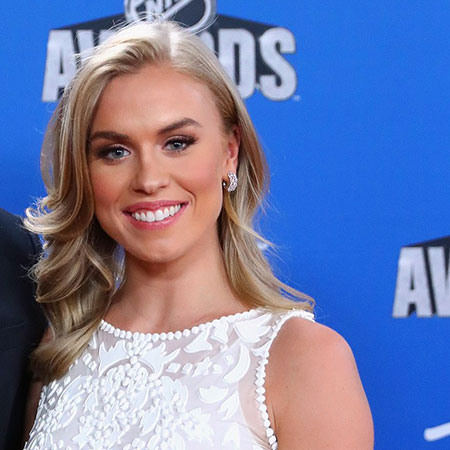 Sydney Esiason is  a sports anchor and reporter who has been working for Sports Illustrated since February 2016. She has gained name and fame as one of the hottest-expressive anchors in the industry. She is also known for her Boomer & Carton show appearance, which she made as a teenager.

Father as a source of Inspiration

Sydney Esiason was born in the United States to father Boomer Esiason. Her father is a retired American Football quarterback and current network color commentator. Having been inspired by her father, she decided to pursue a career in sports anchoring  following her father  footsteps.

From an Intern to an Anchor

In June 2011, she worked at Maxim Magazine as a PR intern for three months. Similarly, she did an internship at PAULE KA in June 2012 for three months and in CBS News as CBS This Morning Intern in June 2013. Later in August 2014, she  joined Jets Nation as a Tailgate reporter.  Esiason held the position for seven months and left the job in February 2015. In November 2014, she became On-Air Digital Host of National Hockey League. Esiason worked in National Hockey League for about eight months . Since February 2016, she has been associated with Sports Illustrated as an Anchor.

Esiason was nominated as a contestant in Busted Coverage’s 2011-2012 Hottest College Athlete. Furthermore, she has raised her East Coast media exposure by attending a couple of public events. Esiason has also been involved in various volunteer clubs that deal with social issues. From June 2010 to August 2010, she worked at Animal Rescue Fund of the Hamptons, and she has also been working as a volunteer at Boomer Esiason Foundation.

Currently (as of 2016), Sydney is dating Matt Martin, left wing for the New York Islanders. Sydney received a tweet from Matt Martin as a stranger and since then they are dating. The couple currently resides in Roslyn.

In an interview with nypost.com Syndey stated that Matt and her father have been good friends.

“They golf together, they watch games together, my dad likes to ask Matt about teams, players, and Matt always asks him for advice.”

Sydney’s closest friends are Megan Bailey and Kristy Rosenberg: they are seen together at games throwing team parties. Sydney is an active user of social networking sites. She is active on Twitter, Facebook, and Instagram where she can be seen interacting with her audiences.