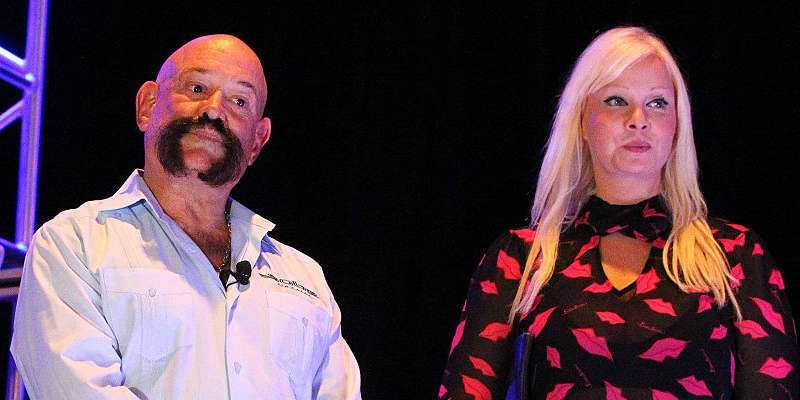 Husband and wife business partners Ted and Robin Vernon, along with the eclectic crew have been affectionately running South Beach Classic (SBC) since 2011.

SBC is a reality television series that aired on Discovery, where car enthusiast Ted and his wife, Robin deal in classic, muscle, antique and other specialized automobiles.

There is a famous saying, “Behind every Successful man, there is a woman.” Likewise, reality star Ted Vernon’s wife Robin Vernon has helped her husband in every possible way, sacrificing her Hollywood career. With that being said, recently, the couple is rumored to have a thing “going on” in their relationship.

The Vernon couple is known for their involvement in a business where they — purchase, sell, and exchange or trade classic vehicle model on the market.

In the show, Ted, look for classic and vintage models, followed by their camera crew and trades it to their clients. Their customers range from retirees, small business owners, tourists, professional athletes, celebrities, and even royalty from the Middle East. One can also trade via e-commerce.

On 14th March 2011, Stuart Carter, an Executive producer for Pioneer Productions said to Discovery: “Ted and his business make for fascinating viewing – with plenty of laughs along the way. He and his wife are terrific, larger than life characters, and the people who come onto the lot every day make for a rich and entertaining mix.”

Their business venture television show ‘South Beach Classics’ has set in the midst of the insane action at Ted Vernon Specialty Automobiles. Here, the power couple Ted and Robins dealt cars ranging from few thousand to over million dollars.

Speaking of a power couple, Ted and Robin met on a blind date in late nvcjk.’s and had been together ever since until their controversial divorce in 2016.

Ted Vernon has set up a name for himself in the Hollywood industry as an actor, writer, and executive producer. Ted Vernon was the executive producer of John Carpenter’s 1995 fantasy/science fiction film “Village of the Damned,” which starred Christopher Reeve, Linda Kozlowski, and Kristy Alley.

He has also credited for his stint as Star actor/executive producer on the critically acclaimed movie “Scarecrows” portraying the Lead Role of Corbin, a mercenary. In addition, Vernon has also spent few years as a professional boxer. He achieved local fame when he decided to establish his mark on an amateur boxing career in his late 20s. But he decided to give it up for his future endeavors.

In September 2016, Ted and Robin hit the headline when the iconic duo gave a hint on their relations. On 14 November, Ted Vernon tweeted saying he will be hosting the South Beach Classic with a new partner named Christine Morris, an entrepreneur, marketing specialist, and model.

“Are you guys and gals, having fun with the new season featuring these handsome characters? I hear there is a nice gal that will be appearing as well. Her last show was a reality series where she lived as a dog. Or something to that degree according to Wikipedia.”

“No he’s a real one! A good worker, clerk, floor man, maintenance guy. A really big part of Ted Vernon Specialty Autos Inc and not ever employed by Robin or affiliated with Robin at South Beach Classics Inc., Ever. He is Teds right hands, left hand, lot boy, clerk, all around maintenance boy as he grew up and desired to become. He keeps garbage maintained, does paper work. Awesome clerk! All in all, wed the new show airs and I would love to hear your positive thoughts.”

There are lots of speculations about Robin Vernon’s plastic surgery. However, there is no legit evidence of Robin doing plastic surgery. She has denied talking about this in every interview she faced. Nevertheless, she is still delightful and still managed to become the face of The South Beach Classics.

Robin Vernon is an American actress, TV personality as well as a car collector which she runs with her husband until their separation. She is also widely known for her roles in Bikini Swamp Girl Massacre and Hell Glades. Being such a successful woman, Robin has an estimated net worth of $2 million dollars (2016).