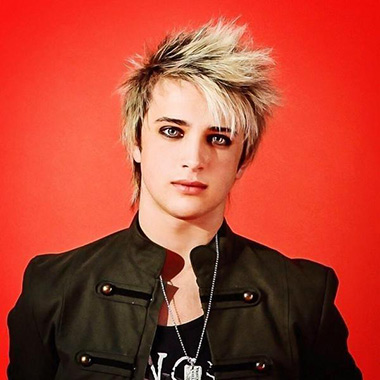 Sunnyvale, Texas rocker, and vocal coach Dalton Rapattoni survived until he was finally voted off against vocal powerhouses Trent Herman and La’Porsha. He may not have conquered the show, but he surely captured millions with his theatrics and radical way of singing. According to the Judge Harry Connick Jr., Dalton has got a unique ability of “Daltonizing” songs.

Here are some trivia, some tiny-winy goodies you may not know about him.

He excelled creativity on his American Idol finale audition

No one had expected that someone will perform theatre legend Andrew Lloyd Weber’s “Phantom of the Opera” on the American Idol audition. He amazingly Daltonized the song, making it sound like an awesome combo of rock and musical. Keith Urban later commented, “You are an artistic contribution.”

He was pursuing music professionally before American Idol.

Dalton started jamming guitar at the age of 11. One year later, he joined the School of Rock in Dallas ultimately forming local band Fly Away Hero with his friends. He was 15 when he joined the Los Angeles-based boy band IM5, which was founded by American Idol creator Simon Fuller, Madonna’s creative director Jamie King, and gossip media mogul Perez Hilton. Dalton said bye-bye to IM5’s mediocre success in 2014 and revived “Fly Away Hero” with his friends.

He had the better chance of winning the show more than anybody.

Everybody knows WGWG’s have a better chance of winning the title more than anyone else. This season, Dalton was the perfect package WGWG (white guy with a guitar). As he enjoyed looks of a rocker and voice of an angel, everybody expected him to do well in the completion. And his beautiful blue eyes and spiky blonde hair combo were the icings on the cake.

He teaches music and vocal lessons to kids.

He teaches instruments and vocal lessons to the children pursuing music in Dallas located School of Rock. What a way to give back to the place where you learned music.

He is a prince charming.

In addition to his sharp looks and magnetic voice, he is known for his Rad and fresh personality, which makes him a charmer at heart.

He is a disciplined young man

The 20-year-old Dallas native lives life in a planned way. Just, he finishes his targets on time and makes plans to set his goals.

He is known for his distinct looks of a rocker

He decorates his eyes with guyliner and mostly wears jeans, t-shirts, and suitable inner.

He adores feminine side of his personality

He performed on his audition day wearing his ducks that had purple flowers imprinted on it. He sang The Phantom Of Opera quite differently than the original theatre version. Later, Jennifer Lopez commented, “You have his like really mix of like soft and hard like masculine but like feminine with the makeup and flowers and your shoes and this, it’s like the rock with the musical…it’s Like you are turning everything and mixing it together and making something unique, beautiful and special. I like it and like your voice.”

He said he would be pursuing alternative music post-Idol

In a post-Idol interview, he has stated that he is more interested in alternative music, like ” 1975,”  than playing rock. In the interview, he also revealed that he is negotiating with 19 records for a deal to happen and if that doesn’t happen, he will be making music independently with his