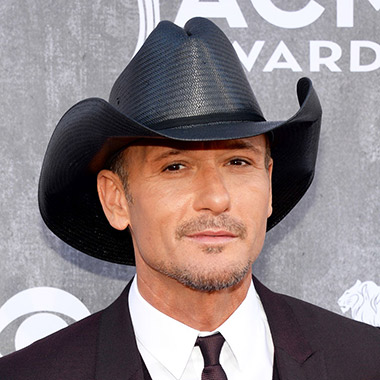 Tim McGraw is an American singer/songwriter as well as an actor. His eleven albums reached No. 1 on the Country Billboard.

Tim was born on May 1, 1967, in Delhi, Louisiana, U.S. His birth name is Samuel Timothy “Tim” McGraw. He was born to Elizabeth “Betty” Ann and Frank Edwin “Tug” McGraw Jr. His stepfather’s name is Horace Smith. In 2004, his biological father died. Since his childhood days, he loved playing competitive sports which include baseball. He studied at the Northeast Louisiana University on a baseball scholarship. He also became a member of the Pi Kappa Alpha Fraternity. While he was in college, he learned to play guitar.

Curbs Records started to notice McGraw in 1990. Later he signed him to a recording contract. He released his first single “What Room Was the Holiday In” but unfortunately did not enter the Billboard Hot Country Songs chart. He then released three single “Welcome to the Club”, “Two Steppin’ Mind” and “Memory Lane” from his album Tim McGraw. He released his second album “Not a Moment Too Soon”. In 1994, the album became the most successful and best-selling country album. The first single from the album is “Indian Outlaw” which reached No. 15 on the Billboard Hot 100. The second single “Don’t Tale the Girl” reached No. 17 on the Hot 100. The third single “Down on the Farm” reached No. 2 on the country charts. In 1994, he won Academy of Country Music awards.

In 1995, he release his album “All I Want”. The album reached No. 1 on the country charts. The album sold over 2 million copies. The lead single “I Like It, I Love It” reached No. 1 on the country charts. The two single “Can’t Be Really Gone” and “All I Want Is a Life” reached at Top 5. In 1996, the fourth single “She Never Lets It Go to Her Heart” became No. 1. Another single from the album is “Maybe We Should Just Sleep on It”.

In 1997, he released his album “Everywhere” which sold 4 million copies becoming No. 2 on the album charts. The four single “Everywhere”, “Just to See You Smile”, “It’s Your Love” and “Where the Green Grass Grows” reached the top of the country charts. The album won Album of the Year award from The Country Music Association in 1997.

His album “A Place in the Sun” sold 3 million copies. The album debuted at top of the US country and pop albums chart. The single “My Best Friend”, “Please Remember Me”, “My Next Thirty Years” and “Something Like That” became hit. Her single “Some Things Never Change” peaked at No. 7 on the country chart. He released his Greatest Hits album in 2000. The album sold 6 million copies. In April 2001, he released his album “Set This Circus Down”. The singles “Angry All the Time”, “Unbroken”, “Grown Men Don’t Cry” and “The Cowboy in Me” became No.1 country hits.

His first Christmas single “Christmas All Over the World” was released in December 2011. On May 21, 2012 he signed contract with Big Machine Records. On February 5, 2013 he released his debut album from Big Machine “Two Lanes of Freedom”. The single from the album are “One of Those Nights”, “Truck Yeah” and “Highway Don’t Care”. On August 17, 2015 he released a new single “Top of the World” to radio.

He is married to country singer Faith Hill. The couple has three daughters together.

He holds a private pilot license and owns a single-engine Cirrus SR22. In 2015, Forbes estimated McGraw’s annual income at $38 million and as of 2016,  his net worth is $145 million dollars.