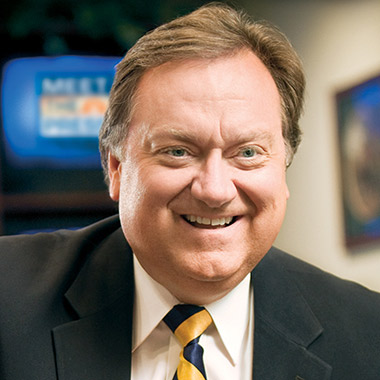 Tim Russert was an American television journalist as well as a . He became the longest serving moderator of NBC’s Meet the Press as he appeared there for 16 years. In 2008, he was named as one of the 100 most influential people in the world by Time magazine.

Tim was born on May 7, 1950, in Buffalo, New York, U.S. His birth name is Timothy John Russert. His was born to Elizabeth “Betty” and Timothy Joseph “Big Russ” Russert. His parents separated in 1976. He is the second children of his parents. His sisters are Betty Ann, Kathleen, and Patricia. He attended John Carroll University and received his B.A. in 1972. In 1976, he graduated with honors from the Cleveland State University, Cleveland-Marshall College of Law.

He started working for NBC News’ Washington bureau and later was promoted to bureau chief in 1989. In 1991, he started working as the host of the Sunday morning program Meet the Press and became the longest serving host of the program. Later in 1992 the name was changed to Meet the Press with Tim Russert. The show became a hit and he became famous because of his extensive preparatory research in the show. He received more than four million viewers per week.

In 2008, Time magazine named him one of the 100 most influential people in the world. He calculated possible Electoral College outcomes using a whiteboard during NBC’s coverage of the 2000 presidential election. He summed up the outcome as dependent upon “Florida, Florida, Florida”. The scene was described as one of the 100 greatest moments in TV history by the TV Guide. He again predicted the final battleground of the presidential elections of 2004 “Ohio, Ohio, Ohio” which was accurate again. He also predicted the 2008 presidential election would be Arizona, New Mexico, Nevada and Colorado during the MSNBC show Tucker.

He has won several awards for excellence in journalism. The Radio-Television News Directors Association awarded him with the Paul White Award. He also won the Allen H. Neuharth Award, the American Legion Journalism Award, the Catholic Academy for Communication’s Gabriel Award, the John Peter Zenger Freedom of the Press Award, the Veterans of Foreign Wars News Media Award, the David Brinkley Award for Excellence in Communication and the Congressional Medal of Honor Society Journalism Award. He covered the funeral of former President Ronald Reagan and won an Emmy Award in 2005.

Tim got married to Maureen Orth in 1983 in Madrid, Spain. The couple together had a son named Luke. On June 13, 2008, he collapsed at the offices of WRC-TV. He was 58 years old when he died.