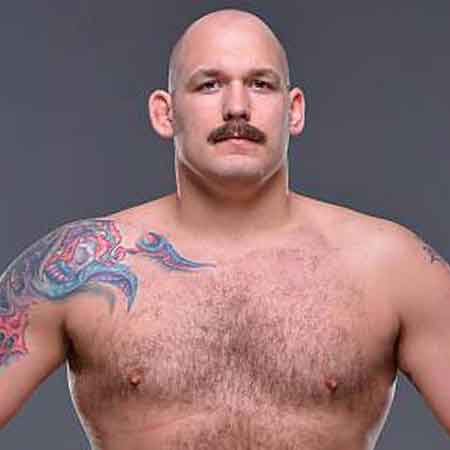 The American mixed martial artist, Timothy Johnson currently competes in the Heavyweight division of Bellator MMA. He has also competed in Ultimate Fighting Championship (UFC). He began his professional career in 2010. The fighter has a professional record of 12 wins and 4 losses.

Johnson is currently a single man. He has kept his dating life under the wraps.

Johnson was born on 13th March 1985, in Lamberton, Minnesota. There is not much information regarding his parents. He is of American nationality.

As for his education, the fighter recently completed his college studies in 2018. He attended the Minnesota State Univerity Moorehead. It is not known what he majored in, however, Johnson once mentioned that he had three majors.

Johnson began fighting while in college. He became a two time All American wrestler at Division II in his university. After that, the fighter made his professional mixed martial debut in October 2010, competing in regional organizations around North Dakota. There he held a record of 7 wins and a loss.

The fighter was then signed by UFC due to his impressive first-round finish of Travis Wiuff in October 2014. Johnson made his UFC debut against Shamil Abdurakhimov on 4th April 2015 and won the bout via a TKO in the first round. He won the performance of the night bonus for the bout as well.

With the promotion, Johnson fought and won against Marcin Tybura, Daniel Omielanczuk, and Marcelo Golm. On the other hand, he was defeated by Jared Rosholt, Alexander Volkov and Junior Albini in UFC.

In recent events, the fighter is set to appear in Bellator MMA. It was revealed that Johnson signed a multi-fight deal with the promotion on 13th April 2018. Apart from fighting, he is also working at Minnesota Army Guard. Johnson also works as a bouncer at a bar and drives a truck for a living.

Johnson is not a married man. He is quite private regarding his personal life. He has not had any public relationships so far. Working as a bouncer, he meets many beautiful performers and celebrities which he cites as a perk of the job. You can check it out below.

Nevertheless, the fighter does not seem to be in a relationship at the moment. We can assume that he is single. He could be dating someone privately but it is something we do not know at the moment.

The fighter Timothy has earned a huge amount of sum from his successful MMA career. His debut UFC bout reportedly earned him a staggering $66,000 thanks to his win as well as the performance of the night bonuses.

The fight must have caused his base salary to increase. Johnson has also signed a contract with Bellator whose value is yet to be disclosed. Apart from that, he has other jobs that must pay him well. Aside, Johnson lives a comfortable lifestyle in Fargo, North Dakota where he trains at the Academy of Combat Arts.

Moreover, Johnson also receives a decent amount of money from several brands as an endorsement. Allocating information from several sources as of 2018 it is found out that Timothy Johnson current estimated net worth is around $400 thousand.