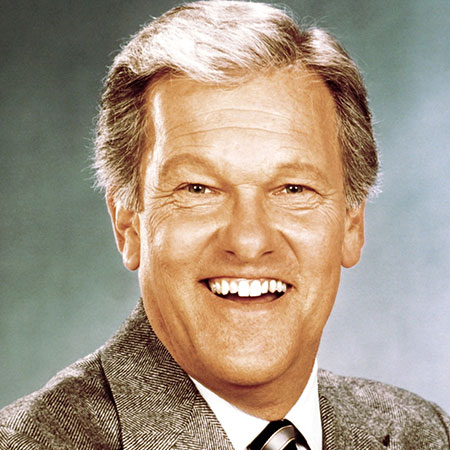 Tom Kennedy, born name James Edward NArz, was a television presenter who was best known for his presentation in game shows.

Born in Louisville, Kentucky, United States of America as the youngest brother of host Jack Narz, Tom Kennedy was active as the presenter from 1958 to 1989. He was the brother-in-law of the late Bill Cullen.

He had changed his name before he hosted his first show, The Big Game, so as to avoid the confusion it can give.

Moreover, he also appeared as the host of a talk show The Real Tom Kennedy Show at the beginning of 1970 and was a panelist on Tell the Truth.

The Price is Right

On September 9, 1985, Tom started to host syndicated, nighttime version of The Price is Right. The show was previously hosted by Dennis James and Bob Barker. Kennedy had a tough time when his version of the show had to face the severe competition with the other show such as Jeopardy and Wheel of Fortune. Then, his show failed to get prime access slot and was allocated in night time slots. However, Kenney didn’t give up and hosted the show for 170 episodes before it was closed on May 30, 1986.

After having three decades-long tenure as a presenter, he announced retirement in 1989, after numerous game shows that he produced failed to grab the market. His last game show was Wordplay, which he hosted from December 29, 1986, to September 4, 1987. Since retirement, he has kept a low profile. Despite not having prestigious retirement, he received numerous awards during his long career. He and his brother were co-recipients of the Game Show Congress Bill Cullen Award for Lifetime Achievement. After retirement, he made his appearance on Hollywood Squares in “Game Show Week Part 2”.