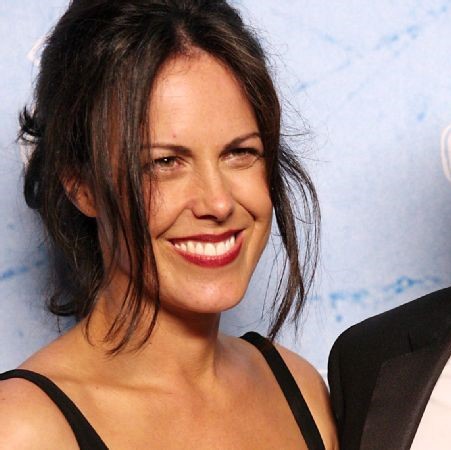 Tracey Mcshane is a former veterinary technician, graphic designer, author, and longtime animal advocate. She is famous for being the wife of Comedian, Jon Stewart.

Tracey and Jon tied the knot in 2000 after getting engaged on 30th July 1999. The couple welcomed their first child a son, Nathan Thomas Stewart in 2004 and their second child, daughter, Maggie Rose Stewart in 2006.

Tracey Lynn McShane was born on 6th August 1967, in Philadelphia, Pennsylvania. She studied in San Francisco at the California College of Arts and Crafts in the mid-1990s. She took a graphic designing class at Drexel University and worked as a graphic designer.

McShane went back to school to become a veterinarian shortly after her husband took over hosting “The Daily Show.” She had worked a lot of different jobs because she kept thinking it was the job that she wasn’t liking. She previously worked at the Bronx Zoo before she owns a Moomah The Magazine, (formerly Tribeca’s Moomah Cafe).

McShane grabbed the media attention when she got married to her sweetheart, Jon Stewart. Her husband, Jon is a comedian as well as writer, producer, director, actor, and media critic.

The couple met on a blind date in New York in 1995 at a Mexican restaurant. At this time Jon’s TV show had just been canceled, so presumably, he had his vulnerabilities, too.

After seven years long relationship, she confessed she was in a bad state of mind. Tracey revealed, when she was talking to her roommate about her future boyfriend, she said that she would like to be as funny as Jon Stewart. Little did she know that she will actually become his girlfriend and later, his wife. Tracey’s roommate set up the meeting.

In the beginning, Tracey and her spouse, Jon had a long-distance relationship. Later, in 1999, Jon Stewart proposed through a crossword puzzle created for them by Will Shortz, The New York Times’ crossword editor.

They announced their engagement on 30th July 1999, and one year later they tied the knot in 2000. The couple welcomed their first child a son, Nathan Thomas Stewart was born 3rd July 2004. After two years later the Tracy and Jon welcomed their second child, daughter, Maggie Rose Stewart in 2006.

Bought a farm in New Jersey

She and her husband bought a farm in New Jersey. They also announced their plans to open a sanctuary to rescued farm animals that will be affiliated with the national animal rescue group “Farm Sanctuary”.

Wo Stewart also wrote a memoir “Do Unto Animals: A Friendly Guide to How Animals Live, and How We Can Make Their Lives Better.” The book is about animals and how to take care of them.

On 11th March 2005, Tracey Mcshane spent close to five hours being booked for driving with a suspended license in Central Park around 11 am. Stewart’s spokesman, Matt Labov, said:

“She wasn’t speeding but the police discovered that she had a suspended license. She didn’t even realize that she paid a ticket last week.”

But apparently, Tracey check was not processed and cops took her car, cuffed her, loaded her into a squad car and took her to Central Booking. According to Police source, she was fingerprinted, whereas McShane shies from the spotlight, smiled as she was photographed during her perp walk.

Tracey McShane earns a good sum of money in her career. Being a former veterinary technician, graphic designer, author, and animal advocate, she is able to collect a good sum of money from her different professions. Tracey alone Net Worth as of 2018 is estimated to be around $1 million.

On the other hand, Tracey McShane husband, Jon who is an actor, comedian, and political satirist, he has an annual salary of $25-$30 million. He sold his New York City Penthouse apartment in $17,500,000 in 2014. Allocating information from several sources as of 2018 it is found out that his current net worth is around $80 million.