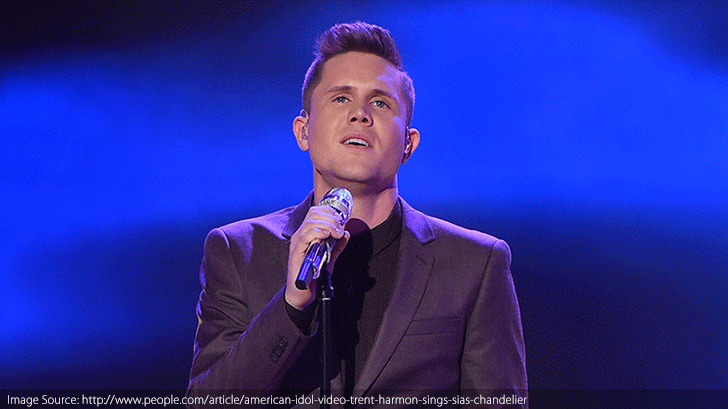 Trent Harmon, a young, American, who has been able to impress judges and audiences in American Idol Season 15, which started on January 6. 2016, has gained popularity with his energetic performance in the ongoing competition. Having performed different genre songs on stage,  from pop and rock to country music, Harmon has been able to impress judges with his soothing voice and a strong sense of high notes.

Born on October 8, 1990, Harmon recognized his interest in music when he was 8. He was born in Amory, Mississippi, United States and attended local high school in Amory. Being born into a family with a musical background, Harmon got his mother as his music teacher at the early age when his mother started to teach him classic hymn “Amazing Grace”. He grew up performing in the church. During his high school days and college days, he played in various programs and received wide appreciation. Being thirsty to learn music, he attended various musical workshops while he was in college.

Trent Harmon is alumni of The Voice. He appeared on audition after his friends urged him to participate in the show but he could not make it through. Before giving trying for The Voice, he was working at a family restaurant. After his performance on American Idol, one of the judges Jennifer Lopez said that she was blown away by his performance. Another judge Harry Connick Jr. indicated Harmon’s performance as the one of the best performance so far. After his some splendid performances, fans are proclaiming him a potential winner via Twitter.

From his first audition for American Idol in Little Rock, Arkansas, coming to this far, he has gained tremendous media attention and fan following. Talking about his personal life, till date, he has not mentioned anything about his relationship and girlfriend. Being busy on various shows and competitions he might not have given much more importance to girls. Having a melodious voice, Harmon has been followed by numerous female fans and he might have got many proposals, but he seems single till now. Undoubtedly, it’s not so hard for him to find right women for him with such good looks but at the current time, he seems to be more inclined to a musical career.

Describing his outer looks, he has a height of 5’10’’ and has got perfectly maintained body shape. He can be seen wearing the hat with guitar in his hand in his YouTube videos. His classic gesture has always been the point of attraction for his attention. From his dressing style, we can say that he has a strong sense of dressing, and he is well updated with the latest fashion. This talented, handsome hunk is active in all social media which he has been using to appeal for votes. This young talent has a lot more things to do in future, and American music industry can expect some musical revolution from him.