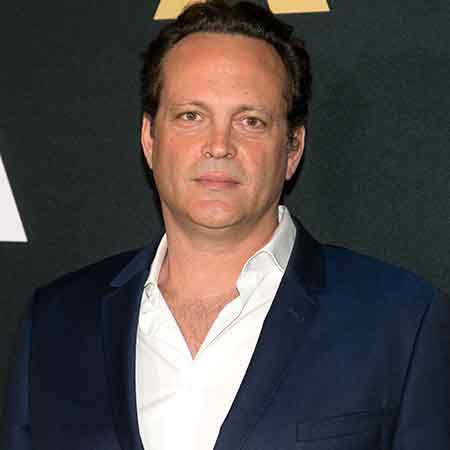 Vince Vaughn is an American actor, screenwriter, producer, and comedian, best recognized for his role as Trent Walker in the 1996 film, Swingers. Besides, he is also one of the pre-eminent actors of the movie such as Wedding Crashers, Couples Retreat, Old School, the Break-Up and so on.

Vince Vaughn is a married man. He married a real estate broker, Kyla Weber. The husband and wife are blessed with two children a daughter, Lochlyn Kyla Vaughn and a son, Vernon Lindsay Vaughn. Prior to that, he has been in multiple relationships.

Vince Vaughn was born on 28th March 1970, in Minneapolis, Minnesota, to Vernon Vaughn, father, and Sharon Eileen DePalmo, mother. His mother is a real estate agent and stockbroker whereas his father was a salesman for a toy company.

His mother was once ranked as one of the United States’ top money managers by Bloomberg Wealth Manager Magazine.

As a child, Vaughn played football, baseball, and also wrestled. However, he stopped playing after he was introduced to musical theatre. Vaughn then decided to make his professional career in acting. He completed his education from the Lake Forest High School in 1988.

Vince Vaughn first onscreen work was in the television series, China Beach where he portrayed a role of Motor Pool Driver. In the same year, he also made an appearance as Bill Peterson in 21 Jump Street. Besides, his first big-screen role was in 1991, For the Boys where he played a role of Cheering Soldier in Crowd.

As of now, he has appeared in several television series and films. Some of them include True Detective, Saturday Night Live, Sex and the City, Hercules, Hacksaw Ridge, Term Life, Unfinished Business, The Dilemma and so on.

Currently, he is working for his upcoming movies fighting with My Family, Dragged across Concrete and Against All Enemies.

Vince Vaughn married to wife, Kyla Weber in 2010 who is a real estate broker. They shared their vows in the historic Armour House at Lake Forest Academy. The couple is blessed with a son, Vernon Lindsay Vaughn, and daughter, Lochlyn Kyla Vaughn born in 2013 and 2010 respectively.

Before Kyla, he dated American actresses, Joey Lauren Adams, and Jennifer Aniston. However, their relationship was for the only short period of time.

More recently, Swinger actor, Vaughn was arrested on suspicion of driving under the influence. DUI stopped him at DUI Checkpoint outside of Los Angeles around 12:30.

As an established actor, Vince Vaughn has accumulated a good sum of money. Besides, as a screenwriter, producer, and comedian, he has also increased his net worth. Allocating information from several sources as of 2018, it is found out that Vince Vaughn current estimated net worth is around $50 million.

Back in 2005, he received a salary of $3 million for his role in the movie, Wedding Crashers. Similarly, $12 million from the Break-Up, $20 million from Fred Claus, and $17.5 million from Dilemma. Moreover, he owns a home in La Canada Flintridge worth $3.9 million and house in Hollywood hills worth $2,375,000.