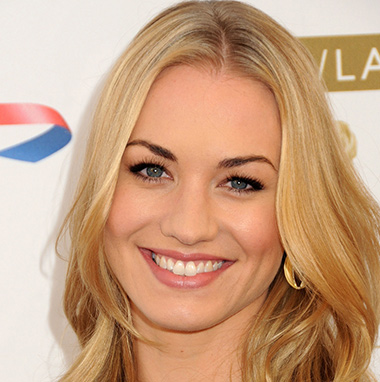 Yvonne Strahovski is an Australian actress, well known for her role in series Chuck as CIA Agent Sarah Walker in the NBC television.

Strahovski married to her long-term boyfriend, Tim Loden who is an actor appeared in Chuck along with her.

Yvonne was born as Yvonne Jaqueline Strzechowski on 30th July 1982  in Werrington Downs, New South Wales. She was born to parent’s Bozena and Peter Strzechowski who has emigrated from Poland. Her mother works as a lab technician whereas her father is an electronic engineer.

Yvonne started taking acting lessons at the age of 12. She attended the Santa Sabina College, Strathfield and completed her graduated from University of Western Sydney’s Theater Nepean in 2003. She then co-founded a small theater company and supports PETA and also appeared in an ad for “Adopt Don’t Buy” campaign.

She was involved in several social works. She even hosted charity tennis tournament in May 2010 to raise funds for the animal shelter.

Yvonne was in a relationship with Josh Schwartz, an American writer. She was once in a passionate touch with Matt Dorgan in 2006. They both met each other on set for filming The Plex. Matt is an Australian actor who is known for his role as Mouse in The Matrix.

Strahovski dated Tim Loden who is an actor appeared in Chuck with her. They tried to hide their relationship status but in 2009, their relationship was revealed. They were spotted together at a public event and were dating each other about 5 years.

Yvonne Strahovski gave a huge surprise to her fans as she revealed that she got married to Tim. She revealed her marriage during the 69th Emmy Award held in Los Angeles.

Yvonne played as Viola in Twelfth Night which was a school production. She then appeared in several films and television roles in Australia. She played Freya Lewis in Double the Fist and also in Australian Drama HeadLand.

She was also seen on Channel Nine’s Sea Patrol. When there was the audition for the show “Chuck”, she sends her audition tape in the United States. She then was contacted by Chuck producers the next day. She was called a week later letting her know she was cast as Sarah Walker.

Strahovski then moved to the United States six months later. Her stage name was Strahovski for a producer for the sake of easy pronunciation. She appeared in Mass Effect Galaxy, Mass Effect 2 and Mass Effect 3 as Miranda Lawson. Her face was scanned and animated in this series. Her voice was in the English version of Parasite Eve, The 3rd Birthday for the PlayStation Portable which was released in March 2011.

In 2011, Yvonne Strahovski appeared in Killer Elite with her co-stars Jason Statham, Clive Owen, and Robert De Niro. She also appeared in The Guilt Trip which was 2012 comedy alongside Seth Rogen and Barbara Streisand. She was the lead in Frankenstein in November 2011.

Yvonne also featured in a new SoBe life commercial in March 2012. She was ranked as 35th in Maxim Hot 100 2012. She joined for the seventh season of Dexter where she played Hannah McKay. She also played in the eight season.

She made her Broadway debut in Golden Boy. She then joined FOX’s TV series 24: Live Another Day where she played as Kate Morgan who is a CIA Agent. In the same year, she was cast as Rene Carpenter on Astronaut Wives Club.

Yvonne Strahovski remained in Maxim’s Hot 100 from 2009 to 2013. She won Teen Choice Award in 2010 for Choice TV Actress: Action in Chuck as well as a nomination for Spike Video Game Awards for Best Performance by a Human Female for Mass Effect 2.