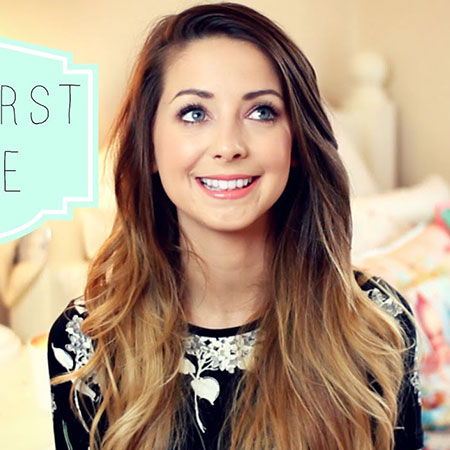 Zoe Elizabeth Sugg, well known as Zoella was born on 28th March 1990. She is an English fashion and beauty vlogger, author and is a very popular Youtuber. She is mostly known by her YouTube name Zoella. She has written a novel called Girl Online, which was released in November 2014. Her first-week sales broke the record of Nielsen BookScan for highest first-week sales of a first-time novelist. The record was unbroken since 1998.

Zoella was born in Lacock, England, UK. She grew up with her younger sister Joe Sugg in Lacock. Joe is also a vlogger and internet personality. She is also known by her Youtube name ThatcherJoe. Zoella went to The Corsham School and after completing her study in the school she joined Arts College. She was very interested in trying new dresses of new designs. She loved to create her own style of dressing and had new concepts on it.

While talking about her career, Zoella started to work at an interior design as an apprentice. In February 2009, she created her blog called Zoella. The blog was so popular within the year that it had thousands of followers. The blog was visited by 450 million visitors by the end of September 2015. After getting all the positive responses from the people, she didn’t want to limit within a blog. She decided to make a YouTube channel and in 2009, the blog was expanded into a YouTube channel. At that time, Zoella was working at the British clothing retailer New Look. At the beginning of making her YouTube channel, she named it “zoella280390”. She named it after her birth date and later changed it to Zoella. The channel is about the fashion, trends and beauty hauls. Despite Zoella, she has another channel “MoreZoella”. The channel contains vlogs about the stuff she does in her day. She has been appearing frequently alongside many other YouTubers on the other channels and has also collaborated with other popular YouTubers on her channel.

On 25th November 2014, Zoella released her debut novel titled “Girl Online”. The book is about what happens when a 15-year-old blogger’s blog goes viral. The book is the highest first-week sold book till date for the debut author. It broke the record of novelist Nielsen BookScan, which he made in 1998. The sequel of Girl Online was released on 20th October 2015. It was titled “Girl Online: On Tour”. Being one of the top YouTuber, she has a net worth of $3.5 million (2016).