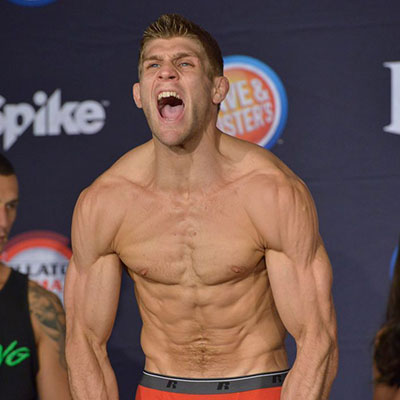 Primus signed with the Bellator in 2013 and made his promotional debut on 27th September 2013, at Bellator 101. His professional MMA record includes 8 wins, 0 loss, and 0 draws. Primus is married to his long-time girlfriend, Kaylee Primus and has a son named Aisen Lee Primus.

Brent Primus was born on 12th April 1985, in Eugene, Oregon, United States. Even being such a recognized MMA fighter, Primus hasn’t revealed any information about his parents and siblings.

Primus attended the Sheldon High School, where he played soccer and further helped his school team tie South Eugene High School for the co-state title. After few years, he began learning Brazilian jiu-jitsu and earned a black belt in only six years.

During his amateur career, Brent Primus made a total record of 5 wins and 1 loss before being promoted to professional MMA career. Primus made his professional MMA debut in September 2010. In his debut match, he faced Chris Ensley and got the victory via first-round submission.

He next defeated Roy Bradshaw via submission in the first round. In 2013, Primus signed with Bellator and made his debut match against Scott Thometz on 27th September 2013, at Bellator 101. Similarly, he further defeated Brett Glass at Bellator 109. His winning record continued as he defeated Chris Jones at Bellator 111.

Moreover, Primus competed at Bellator 141 on 28th August 2015, where he got the victory over Derek Anderson. On 22nd April 2016, he Primus won the fight against Gleristone Santos at Bellator 153 via split decision.

The renowned MMA fighter, Brent Primus has gained success in his professional as well as personal life. Well, the 33 years old Primus is already married to his long-time girlfriend, Kaylee Primus. The duo began dating back in 2007.

And after dating for eight years, the couple decided to take their relationship to the next level and finally shared their vows on 6th December 2015. The couple is blessed with a son, Aisen Lee Primus.

Both of them shares beautiful pictures of them and their son on their Instagram. The duo is living happily together and yet they haven’t faced any rumors of divorce and extramarital affairs. Moreover, there are no any records of his past affairs.

Brent Primus is living a lavish life with his wife and son. Primus has competed in several competitions and has further gained success as well. From his MMA career, Primus has surely earned an astonishing amount of money.

Allocating information from several sources as of 2018 it is found out that Brent Primus’s current estimated net worth is around $2 million.