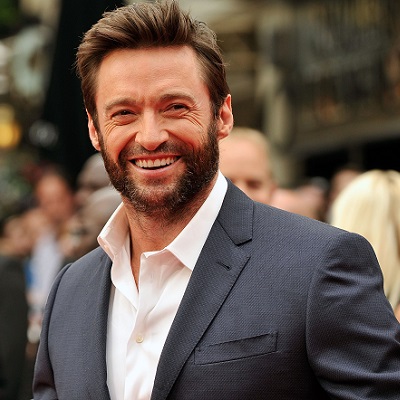 Hugh Jackman is an Australian actor, singer as well as a producer. He is best known for his best long-running role as a Wolverine for X-Men film series Logan, The Wolverine, Prisoners, Les Miserables, etc. In 2013 Jackman was nominated for his first Academy Award as well as first Golden Globe Award as the Best Actor for the movie Les Miserables.

Jackman and his wife, Deborra-Lee Furness tied a knot on 11th April 1996 in St. John’s in Toorak, Victoria. Before getting married, they dated each other for a year.

Hugh Jackman was born on 12th October 1968, in Sydney, Australia to Grace McNeil and Christopher John Jackman. His father was a Cambridge-trained accountant and his parents were originally English but later moved to Australia.

Jackman grew up along with his two sibling brothers Ralph Jackman and Ian Jackman and two sisters Sonya Jackman and Zoe Jackman. He also has a younger half-sister from his mother’s remarriage. Well, when he was 8 years old, his parents divorced. However, he stayed in Australia along with father and two brothers. But his mother and sisters moved back to England.

Jackman completed his primary education from the Pymble Public School. Later he joined all-boys Knox Grammar School for his higher education. In 1991, he graduated with BA in communication from the University of Technology.

Furthermore, in 1994, he graduated from Western Australian Academy of Performing Arts of Edith Cowan University.

In 1995, he received a call offering him a role on Correlli on the night during his final Academy graduation performance. While acting in the following act, he met his future wife Deborra-Lee Furness. Later in 1996,  he played the role of Gaston in the show Beauty and the Beast in the local Walt Disney production.

Furthermore, he also played a Joe Gillis in Sunset Boulevard. In 1999, he acted in the movies named Erskineville Kings and Paperback Hero.

However, after Hugh’s role as a Curly in the Royal National Theatre, in 1998, he was known worldwide. Because of his outstanding role, he won the Olivier Award nomination as the Best Actor. Furthermore, he also starred in the 1999 film version of the same stage musical.

Coming to 2000, his breakthrough came after his role of Wolverine in Bryan Singer‘s X-Men. In the following movie, he co-starred along with Patrick Stewart, James Marsden, Famke Janssen and Ian McKellen. The movie became successful at the box office and earned US$296  million.

Besides this, he also acted in other movies like Dirty Harry, Road Warrior, etc. In 2001, he received a Best Actor Golden Globe nomination for his role as Leopold in the movie Kate & Leopold. Moreover, he also starred in the action/drama Swordfish along with John Travolta and Halle Berry.

Besides this, he also hosted the episode of Saturday Night Live. In 2006, he acted in the movie  The Prestige along with Christian Bale,  Michael Caine, and Scarlett Johansson.

In 2012, Hugh starred in the movie Les Misérables for which he won the Golden Globe Award for Best Actor – Motion Picture Musical or Comedy in January 2013. Besides this, he also acted in other movies Pan, Eddie the Eagle, etc. All of his movies have achieved a good success.

Jackman has appeared as a Wolverine in all the series of the movie X-men. Furthermore, in 2017, he reprised the character Wolverine in the movie Logan. Well, his new movie The Greatest Showman is in the process of release where he has a role as P. T. Barnum.

A versatile actor, Hugh Jackman and his wife, Deborra-Lee Furness tied a knot on 11th April 1996 in St. John’s in Toorak, Victoria. Before getting married, they dated each other for a year. This couple has a daughter Ava Eliot Jackman and a son Oscar Maximilian Jackman.

He is equally maintaining his professional as well as family life. And is often seen spending his precious time along with his family. Besides this, there are no any records of his other relationships. Furthermore, there are no any rumors of his divorce too. During his career, he has won Olivier Award, Saturn Award for Best Actor as well as Golden Globe Award for Best Actor.

Hugh Jackman is one of the richest actors with a good net worth. Well, his current estimated net worth is $150 million which is totally worth. Furthermore, he is also active on social sites like Instagram with 14.3m followers, Twitter with 10.2m followers and Facebook with 23,533,057 followers.