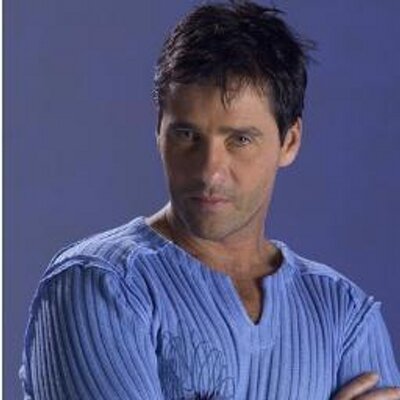 The popular and talented actor, Juan Pablo Shuk is mainly known for portraying a role of Colonel Martinez in the Netflix series, Narcos. Likewise, he is one of the leading characters of the telenovela, El Barco where he played the role of Ernesto Gamboa.

Juan is happily married to a woman named, Ana de la Lastra who is a Spanish actress. Their marriage ceremony was held in Spain. So let’s know Juan Pablo Shuk’s wiki and personal life facts herein today’s column inclusive of his earnings and net worth.

Aged 51 handsome, Juan married to his beautiful Spanish girlfriend, Ana de la Lastra in Spain, 2012. The couple is blessed with a child who was born in 2016.

The husband and wife are living lavish lifestyles as they often share their photo on their social networking sites hanging out in different places.

Likewise, they have maintained their relationship very strong as till the date there has not been any rumors or news about their extra affair. Juan seems to be a loving and caring husband. He gives equal time to his career as well as to his love life.

As an actor, Juan earns a good amount of money. Till the date, he has appeared in multiple movies and telenovela from where he has collected thousands of dollars.

Juan Pablo was born on 17th November 1965, in Bogota, Columbia. He holds a Columbian nationality and belongs to white ethnicity.

Handsome Juan completed his education from the Colegio San Carlos in 1984, before making his acting career debut. In the beginning, he acted a minor role in college play and small events but right after his graduation, he made a telenovela appearance named El cacique y la Diosa.

Following the passion of acting, Juan later appeared in numerous telenovelas, such as Fibre, Maria Bonita, Yo Amo a Paquita Gallego and so on. Likewise, in the year of 1999, he made his film debut entitled, El septimo cielo. So far, he has appeared in numbers of films.

Juan Pablo made first television series appearance in the widely known Netflix series, Narcos in 2016. There he played the role of Colonel Martinez as a police officer along with a several co-actors, Wagner Moura, Pedro Pascal, Luiz Guzman, Paulina Garcia, Joanna Christie and so on. His first television appearance made him famous in the very short time. Currently, he is known as one of the recurring actors of Narcos.