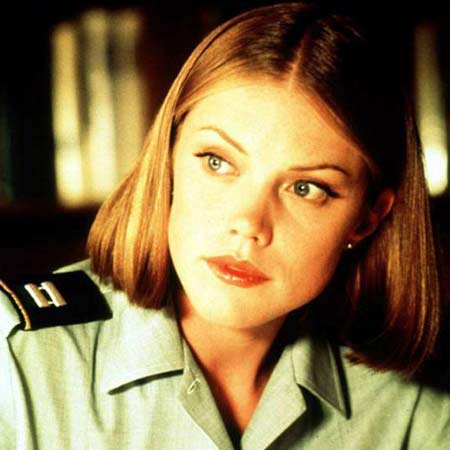 Leslie Stefanson is an American actress and model most known for her role as Captain Elisabeth Campbell in the American crime movie The General’s Daughter. She has featured in several movies, television series, and telefilms.

Stefanson made her Hollywood debut with a movie entitled The Cowboy Way. She was involved in a long-term relationship with her boyfriend and they have a son together.

Leslie Ann Stefanson aka Leslie Stefanson was born on 10th May 1971, in North Dakota. Her parents were Randy Stefanson and Corinne Stefanson. She has two siblings with whom she grew up in Clay County, Minnesota. She holds the American nationality and belongs to white ethnicity.

Stefanson attended Barnard College, one of the Seven Sisters colleges in New York City. She completed her graduation in English Literature from Barnard College.

The proficient American actress, Leslie began her professional career as a model. She earned a huge fame and success with her career in the field of modeling. She shared the screen with several popular stars including Dylan Mc Dermott, Marg Helgenberger, Cara Buono, Woody Harrelson and Keifer Sutherland.

Then she featured in several other movies like Flubber, Beautiful,  and MDs. Among all those several movies she is famous for her role in The Generals’ Daughter opposite James Cromwell, Timothy Hutton, Madeleine Stowe and John Travolta.

Stefanson went to the Robert Cunningham in order to study human anatomy in the early 2000s. She learned to cast her own bronze sculptures during her four years of training.

In the year 2004, she made her signature bronze piece entitled I Myself Alone which was show cast at her first exhibition. Then she was enrolled at The Art Students League of New York in order to strengthen her sculpting and drawing skills.

Some of the greatest products of The Art Students are Norman Rockwell, Jackson Pollock, Alexander Calder, Thomas Eakins and Mark Rothko.

Further, she hosted the show at Rourke Art Gallery Museum in Moorhead, Minnesota. Currently, she focuses on sculpting female figures in brass and terra-cotta.

The renowned actress, Leslie Stefanson was in a long-term relationship with an American actor, James Spader. The couple started dating in 2002 and was finally engaged in 2008. They have also worked together in numerous movies including Alien Hunter and The Stickup.

In 2008, the duo was blessed with a son, Nathaneal Spader. She has two stepsons from her husband, Spader previous marriage with Sebastian Spader and Elijah Spader.

Moreover, Leslie was also in a relationship with an American actor, Ryan O’Neal. They were together before she met James Spader and were finally separated.

Allocating information from several sources, as of 2018 it is estimated that her net worth is reported to be around $1.4 million. Further, her movie The General’s Daughter made with a budget of $95 million was able to gain $149 million at the box office.

Stefanson’s boyfriend Spader has also an estimated net worth of $10 million and he is assumed to earn $125k per episode from the TV series.