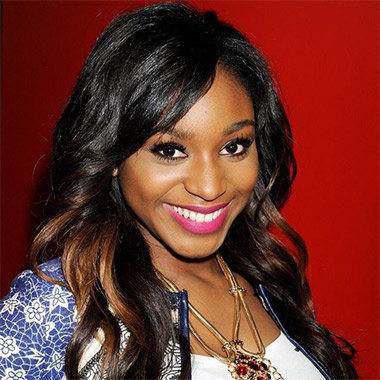 Normani Kordei is a sensational and a great singer who has gained name and fame for her soothing voice. Born on 31 May 1996, she belongs to American nationality, originally from Atlanta, Georgia. She has been working in a band name Fifth Harmony which was formed in July 2012.

Fifth Harmony’s other members include Dinah Jane, Lauren Jauregui, Ally Brooke and Camilia Cabello. They came in limelight after they were placed in The X Factor USA and they signed a contract with Syco Music.

Normani Kordei was born in Atlanta and raised in New Orlean, LA. She spent her childhood days in New Orleans and completed her school education from there. In 2005, Hurricane hit New Oreland hard and then she moved out to Huston, TX.

Hamilton used to dance from her childhood days and used to follow musicians such as Aretha Franklin, Alicia Keys, and Beyonce. She has worked hard to be in the position currently she holds. Influenced by such talented singers, Hamilton always works on improving pitch of her voice tone.

On the first audition of The X Factor, she was appreciated by all four judges and got four yeses. In Bootcamp, Normani sang a song named “It Aint Got You” by Alicia Keys. As the Bootcamp wasn’t shown, Hamilton revealed about in through her Twitter. The judges enjoyed her performance in all round.

Normani along with other girls of Fifth Harmony have earned a very devoted fanbase through their songs where they have shown their vocal abilities. They got many votes from the public which helped them a lot move ahead in the competition.

Normani Kordei has also made her appearance in a short film ‘Book’ based on the story bullying and social prejudice. Moving to her personal life, there have been many rumors about a romantic relationship between Hamilton and Arin Ray, with whom she met during The X Factor.

Their relationship brought conflict in shows although both of them have denied their relationships. Since then there have no any rumors about relationship and affairs. Kordei might have been dating someone secretly which she has hidden well from the eye of media.

Talking about her personal traits, she considered herself as a very shy person in daily life. But when it comes to the stage she is different and loves to enjoy to the fullest on the stage. She is active on social media platforms Twitter, Facebook, and Instagram. As of 2017, Normani Kordei has an estimated net worth of $3 million dollars.