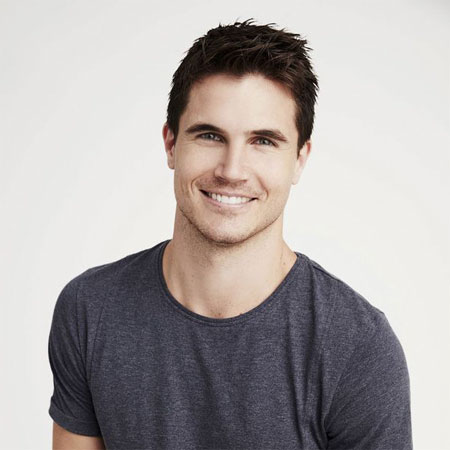 Robbie Amell is an actor and model from Canada. He is well known for playing the role of Stephen Jameson on The CW’s series, The Tomorrow People. He currently plays, FBI Agent Miller in the drama television series, The X-Files.

Robbie is a happily married man. He got married to Italia Ricci on 15th October 2016. The couple began to date each other in 2008, and after a few months later they decided to live together.

Robert Patrick Amell was born on 21st April 1988 to Jo (Burden) and Rob Amell in Toronto, Ontario, Canada. He has a sister with whom he began appearing in small commercials and modeling assignments.

At the age of 16, Robbie Amell began to land theater roles at Lawrence Park Stage in plays such as Louis and Dave, Picasso at the Lapin Agile and The Importance of Being Earnest. Later, he completed his graduation Lawrence Park Collegiate Institute in 2006.

After his graduation, Robbie Amell made his acting debut in 2005, playing the role of Daniel Murtaugh in the film, Cheaper by the Dozen 2. He then starred as Max in the television series Life with Derek from 2006 to 2008.

Robbie Amell also starred in the 2007 horror film Left for Dead. At the same year, he played the role of Nick Anderson in the American Pie Presents: Beta House. From 2008-2011, Amell starred as a Jimmy Madigan in the TV series True Jackson, VP.

Moreover, Robbie made his appearance as Fred Jones in the 2009 TV movie Scooby-Doo! The Mystery Begins. The show became one of the most viewed telecasts on Cartoon Network. Amell reprised the role in the 2010 sequel Scooby-Doo! Curse of the Lake Monster.

As a Fred Jones

In 2013, Robbie got his big lead character Stephen Jameson n CW’s sci-fi drama, The Tomorrow People, which is a remake of the British series of the same name.

Additionally, Robbie joined The DUFF as Wesley, and on 9th July 2014, Amell was cast as a major recurring character on the CW series, The Flash, portraying as Ronnie Raymond/Firestorm.

From 2015 to 2017, he had played many films like Max, Code 8, Nine Lives, ARQ, The babysitter, and When we first met. Currently, Robbie Amell is playing the role of Special Agent Kyd Miller in the TV series, The X-Files since 2016.

Talking about his personal life, he is a happily married man. He got married to Italia Ricci on 15th October 2016. The couple began to date each other in 2008, and after a few months later they decided to live together.

After living together around six years, they engaged on 20th August 2014, and two years later they got married. As of now, they don’t have children, but shortly, they might have plans to have some for sure.

As he is still active in this industry, no doubt this net worth will go higher in coming days. To know more about him, you can catch him on social networking sites.