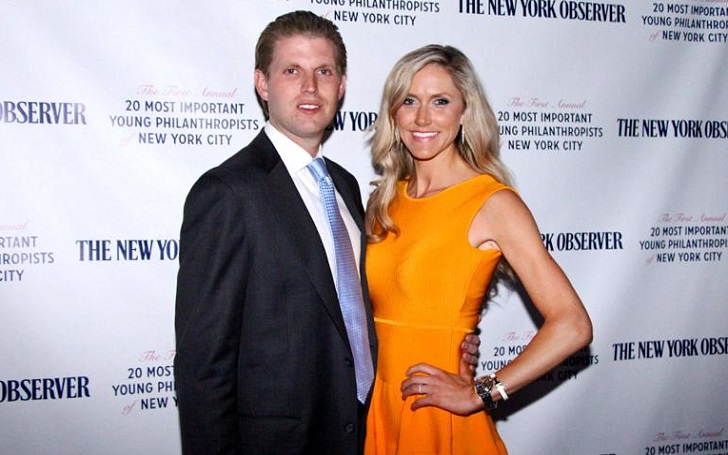 Today we’ll be talking about the love story and married life of Eric Trump. Yes, Eric Trump, son of Donald Trump. We all know that he is married and is living a happily married life but, do you know about his wife and also about their marriage relationship??????

So, today we have come up with the married life and relationship of President Trump’s son, Eric Trump. And also let’s know all about his wife. Aren’t you excited? If yes, then without any delay let’s get started.

Eric Trump Living a Happily Married Life with his Wife

Yes, Eric married his long-term girlfriend. After being in a love relationship for 6 years the couple finally hit the wedding bells. He proposed his girlfriend with a ring from his sister’s jewelry collection.

Eric proposed Lara at the Trump Seven Springs estate in Bedford and then celebrated with The Champagne newspaper reported:

“They were reportedly walking her miniature beagle when he presented her with a ring from his sister Ivanka’s fine jewelry collection. They are said to have sealed the deal with a champagne toast, which Eric brought along for the occasion,”

The couple tied the knot in 2014 at Donald Trump’s Florida Beach Club. About 400 family and the friend attend the lavish ceremony. Till the date of their marriage, there is no any rumor of their divorce or break up. Being deeply loved by someone gives you strength while loving someone deeply gives you courage and both thing strength and courage.

Being deeply loved by someone gives you strength while loving someone deeply gives you courage and both thing strength and courage are seen between Lara and Eric. They truly are made for each other.

Don’t you wanna know that they have children’s or not? Yes, then have a look.

After three years of their marriage, finally, Lara showed off her baby bump in a form-fitting dress at the U.S Women’s Open Golf Championship. They are expecting a baby boy in just a few days.

So, let’s just wait for few weeks to listen to the good news, Lara, we will be waiting for the good news. Our Best wishes are always with you. And we want your’s love to remain same until the end of you’s life.

Lara and Eric welcomed their first child, Erick Luke Trump, on 12th September 2017. The couple is spending their much time with their child and often went out for visit. Here are some of the picture of their child.